Little Did They Know

Posted by lisa on April 2, 2014 | Comments Off on Little Did They Know

Writing Christmas material has been a passion of mine for a very long time. There have been many great songs written about the birth of Jesus that we all long to hear at this time of the year. That being said, there still needs to be new songs written and recorded that hopefully will appeal to future generations as well. I want to be one of the writers that helps keeps the Nativity Story alive…in people’s minds…and hearts. “Little Did They Know” is one of those songs.

“Little Did They Know” focuses on the real life drama that took place just before and after Jesus was born… on that very first Christmas day. Joseph and Mary had made the long and difficult journey form Nazareth to Bethlehem. When they arrived, the couple searched desperately for a suitable place to deliver their child, but were turned away time and again…forced to take refuge in a cold dark stable. Little did anyone know what was to take place would become “the greatest story ever told.” This is the first single I’d ever released. Produced by Stephen Mougin, “Little Did They Know” features the sparkling vocals of Jana Mougin…who offers a heartfelt rendition of the story. We are all very proud of this recording! 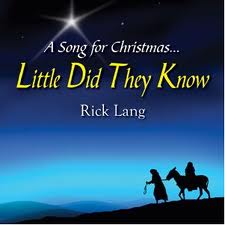