That’s What I Love About Christmas 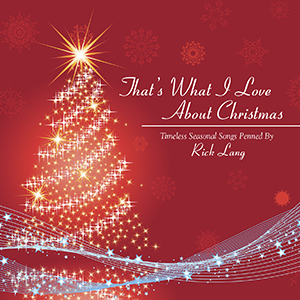 This project is unique. An album for the ages. This music will be listened to from generation to generation. An entire album of timeless original Christmas songs by one of our music’s most revered songwriters and his amazing musician friends. A native of New Hampshire, award-winning songwriter Rick Lang has become well known in the Bluegrass community. His songs have been covered by some of the most renown artists in the Bluegrass music, Southern Gospel and even the Jazz world. Over 70 song cuts to his credit, the number keeps growing each year.

The beautiful traditions of Christmas are something to look forward to each year. Some of those traditions are deeply engrained but it’s certainly refreshing when something new and exciting comes along.

Recorded in Nashville, songwriter Rick Lang has managed to do just that with his new holiday collection That’s What I Love About Christmas. Lang, who has been around the bluegrass and gospel genres for some time as a successful songwriter, has earned his stripes in that arena and makes no secret of his love of the holidays. His almost childlike wonder for the joys of Christmas are reminiscent of yesteryear and it’s exactly that quality that makes this album worth listening to over and over again.

Described as “a beautiful acoustic roots holiday collection, drenched with an infusion of jazz rhythms and folk sensibilities,” the album is beautifully recorded with great attention to detail. One of the more interesting takes is the fact that Lang doesn’t sing or play a note on the entire album but rather composes all of the songs, masterfully arranging each and every one to match the sounds that he hears in his creative mind.

He was smart enough to invite top notch talent to bring these compositions to life along with enlisting the masterful studio touch of bluegrass/Americana producer Stephen Mougin, a superior talent himself. Artists on the album include Nashville jazz chanteuse Annie Sellick, mandolin prodigy and Berklee School of Music grad Sierra Hull, banjo master Ron Block of Alison Krauss + Union Station fame, and more.

A soothing, festive offering that is at times Manhattan jazz on a snowy winter evening and at others, downhome folk and Americana by a mountain cabin fireplace, That’s What I Love About Christmas is the perfect album for someone looking for a quality, new addition to their holiday collection that is bound to become a classic of its own.

Bryan Klausing | Acoustic Rainbow – Poetman Records
Here’s a timeless Acoustic Roots project that is full of nostalgia, good cheer and most importantly great music. Rick is a master songwriter and has assembled some of the best musicians in Nashville for this album.  Rick has done something that few songwriter have managed to accomplish. Add original material into the very small cannon of Christmas music. His songs capture the classic spirit of the season while bringing a new energy to the mix. We strongly recommend this project and look forward to listening to this wonderful album while decorating our Christmas tree, sipping hot chocolate and enjoying the family around the fireplace.

Barry Tashian | Recording Artist, Nashville TN
I’ve always enjoyed the music of Rick Lang. His songs convey a deep sense of faith and equanimity about life. Treat yourself, or a loved one, to the gift of his new album “That’s What I Love About Christmas.

It’s a true gift of fun and inspiring songs, masterfully rendered by a host of exceptional musicians and singers, produced by Steven Mougin. This album will add a special touch to your Holiday Season.

Russell Moore | IIIrd Time Out, IBMA Male Vocalist of the Year
I was blown away by this project and I know it’s going to spend many hours in my player!…Great arrangements around great lyrics and I have no doubt that they will stand the test of time and become classic Christmas songs that people will revisit year after year!

Mike Scott | Performer, Nashville TN
I know you will enjoy this collection of spirited original Christmas songs written and produced by Rick Lang.  This project offers a nice variety and there is something here for everyone.  These new songs are sure to become Christmas Classics!

Jerry Salley | Recording Artist, Songwriter, Producer
From the very first downbeat of Rick Lang’s “that’s what I love about Christmas” this project reminds me of a time in our musical history when songs had a melody and well-crafted lyric. A little bit of jazzy-blues, a little bit of Bluegrass and a WHOLE lot of Christmas spirit. A great project to help you celebrate the Yuletide season!!!

Chris Stuart | Songwriter, Performer
It sounds like a classic Christmas album and it may well become one soon. Producer Stephen Mougin did a terrific job of bringing out the soul of every Rick Lang song. There’s a playfulness as well as spiritual tone to the album that reminds me of the best Christmas albums. I’m not waiting till December to play this, though. It’s already on heavy rotation in my house.Fantastic work by Rick and everyone, and I’m so glad he got to the meaning and nuances of every word.

Stan Hitchcock | Blue Highways TV
The mix of genres is like the surprise in your Christmas Gifts. Sophisticated all the way through. “That’s What I Love About Christmas” is a CD you will want to keep playing all through the Holiday Season. Congratulations on a job well done.

Bob Wester | Radio Broadcaster
Song writer Rick Lang has been storing his latest Christmas compositions since his release of “The Season Of My Heart” some twelve years ago.  The wait was worthwhile and you’ll know why after listening to “That’s What I Love About Christmas.”  Here’s a collection of songs in the best of the Christmas tradition, capturing the feel of some the great Christmas standards.

Rick Lang deserves a salute for his wonderful writing skills as well as seeking out some of the best musicians and vocalists around for this project. Well done Rick and thanks for adding to our enjoyment of Christmas.  This one is certainly to become a favorite.

Jean Johnson | Radio DJ
I have just listened to Rick’s new release “That’s What I Love About Christmas” and even though it is not really bluegrass, it is a very “easy listening” CD.  I would recommend it to anyone who might be sitting by the fireplace with the lights low and wanting some really great music to listen to.

As I have said before, Rick Lang is one of New England’s finest writers.  He really knows how to paint a picture with every song he writes.  This CD is no exception. Thank you Rick for another great creation and I will be very happy to play it on my Christmas shows.