The Season of My Heart 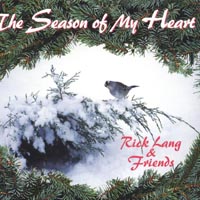 Released in October 2003 on the independent Haley Anna Music label, “The Season Of My Heart” by Rick Lang & Friends, is a collection of 13 new Christmas/Seasonal songs from the pen of New Hampshire songwriter Rick Lang.

Recorded at Appleland Studios in Northbridge, Mass. “The Season Of My Heart” was engineered and produced by Bob Dick, and features multi-instrumentalist Dave Dick on Banjo, Guitar, Mandolin and Vocals; Roger Williams on Dobro; Bob Dick on Acoustic Bass and Vocals; and Karen Lincoln Wilber on Vocals…plus “special guests”

A native of New Hampshire, songwriter Rick Lang has had well over two dozen of his songs recorded by a variety of leading Bluegrass groups including: IIIrd Tyme Out; Lonesome River Band; Front Range; and Southern Rail…among others. His composition “Listen To The Word Of God” appeared on the Lonesome River Band’s critically acclaimed “Carrying The Tradition” recording, which was awarded IBMA album of the year in 1992. Another of his songs, “Sing Praises To The King”, appeared on Front Range’s “One Beautiful Day” album, which was awarded best Gospel recording of the year by the IBMA in 1995.

In the Spring of 1996, Rick Lang & Friends produced “A Tribute To The 100th Anniversary of the Boston Marathon” featuring two of Rick’s songs written to pay tribute to the history of the Boston Marathon…”Running For The Glory” and “Heartbreak Hill”. Both songs received heavy radio airplay throughout New England prior to the event, and “Running For The Glory” was also featured (including a music video of the group) on a TV special entitled “A Century Of Running”…that aired on a major Boston television network.

In 1997, in another collaborative effort, Rick Lang & Friends wrote and produced “First Night”, a tribute to the increasingly popular “First Night” tradition, and were invited to perform the song during the opening ceremony at “First Night” Worcester, Mass that same year. Their recorded version of the song is currently being used to help promote “First Night” programs all across the United States and Canada.

Most recently Rick’s composition “Just Call On Him” recorded by IIIrd Tyme Out was included in a Gospel collection “White Dove” – the Bluegrass Gospel Collection” released by Rounder Records in June of 2003.

Producer – PoetMan Records / Acoustic Rainbow
“What a wonderful collection of Seasonal music. It’s definitely a unique project. I don’t think I’ve ever seen as all-original collection like this before. I love the imagery of the lyrics. Folk, Bluegrass, and even some Americana and Country stations could all potentially play this music”

Dave Higgs / Bluegrass Breakdown Nashville Public Radio
“Man, you’ve done it!  This is a beautiful project unlike any I’ve heard before…full of good cheer, great times, priceless memories and some wonderful sentiments.  It took me straight back to my childhood when Christmas was still a magical and mysterious event. Plus you’ve written some tunes that are destined to become Christmas Classics… “Heavenly Peace”, “Follow The Star”, “Waltz Of The Falling Snowflakes”, “Decorate The Tree With Love” and the title track rank high on my favorite meter. Congratulations on a wonderful project. Finally, somebody does an all Christmas project right! Well done!!”

Al Shusterman KCBL Radio “Backroads Bluegrass”
“Powerful is the best way to describe this great CD. This is the first Seasonal CD that sounded as though it was recorded at a friend’s home & not in a recording studio. I got a very warm feeling listening to this project. The vocals, both lead and harmony, were exceptional. The fervor & enthusiasm in their voices as they sang each song sent chills down your spine. I really loved the song selection. As all the songs were original material, you really had to concentrate on the lyrics in order to get the full impact of these wonderful songs. Hearing this CD once was not enough. It needs to be played several times in order to fully appreciate the combination of their fine voices & the great lyrics of each song. The instrumental work was tasteful and meshed perfectly with the material being sung. Needless to say, the audience response for this CD was overwhelming. While playing the entire CD, my request line never stopped ringing. It is rare to have a strictly Seasonal CD that generates this much feedback. Each & every song was requested to be played again. I know that I will be playing several cuts each week until it is played in total again. I hope I don’t wear this CD out!!!”

Acoustica Magazine
“13 original Christmas tunes by gifted songwriter, guitarist and vocalist Rick Lang… assisted by Dave Dick on banjo, guitar, mandolin and vocals. Roger Williams handles the dobro… Bob Dick carries the bass, guitar and vocals… and Karen Lincoln Wilber contributes powerful and very pleasant vocals to the project. Yes, Christmas tunes, perhaps a bit early, but I can assure you that once this project hits the streets, it will be gone in a flash.

It is really nice to hear this collection of 13 fresh Christmas tunes! “Sleigh Bells” features ripping dobro, banjo and guitar leads from start to finish. If Santa’s reindeer have this tune in their sleigh CD player, they are in for big trouble! “I Dreamed That I Was There” tells of a dream whereas he was witnessing the events of the Holy Christ Child in a manger, a beautiful tune performed to perfection. The project is well produced, offers a new and different selection of Christmas tunes for your Seasonal enjoyment… even a full-blown “blues” style tune “Sleigh Full Of Toys”… done with acoustic Bluegrass instruments of course!”